Istanbul’s Underground Basilica Cistern (Yerebatan Sarayı/Sarniç) or ‘Sunken Palace’ today is a atmospherically spotlighted massive underground water cavern of beautiful arches and Roman support columns and their watery reflections, and used to be the Byzantine city’s main water storage under siege or in hard times… 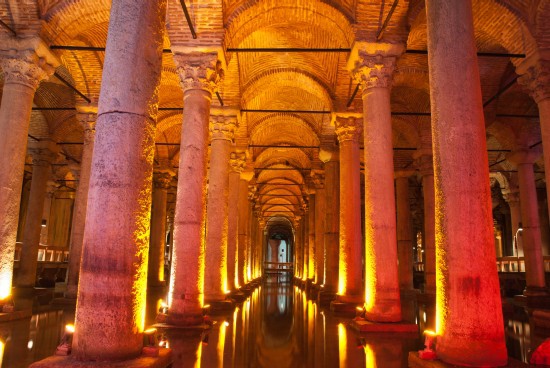 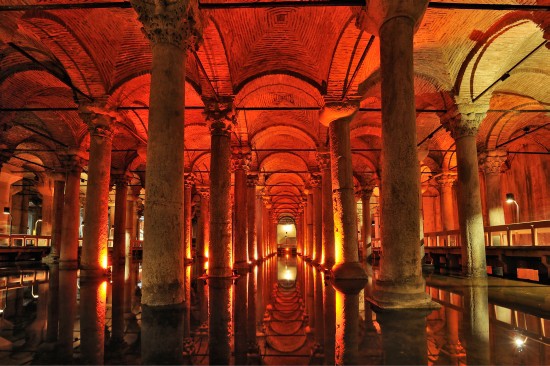 The Underground Bascilica Cistern (or Yerebatan Sarayi in Turkish, meaning ‘Sunken Palace’) is a great underground chamber used in times of siege and is the largest and most beautiful Byzantine cistern of its kind of several hundered lying under the city of Istanbul.

Originally built by the Byzantine Emperor Justinian in the 6th century after the Nika revolt, it later became known as the Basilica Cistern during the Roman period, as there was a Stoa Basilica above the pre-existing one at the time.

After the conquest of the city by the Ottoman Turks, it was forgotten of and nobody knew that it existed. Re-discovered in 1545, it was used to water the gardens of Topkapi Palace.

Comprised of different materials from around the Byzantine Empire, interesting columns and carvings such as the Medusa head (pictured right) can also be seen.

Today it has a rather eerie and mystical ambiance. Clever spotlighting makes the water shimmer with colored dancing lights and the water ripples from an occasional fish swishing its tail in exuberance.